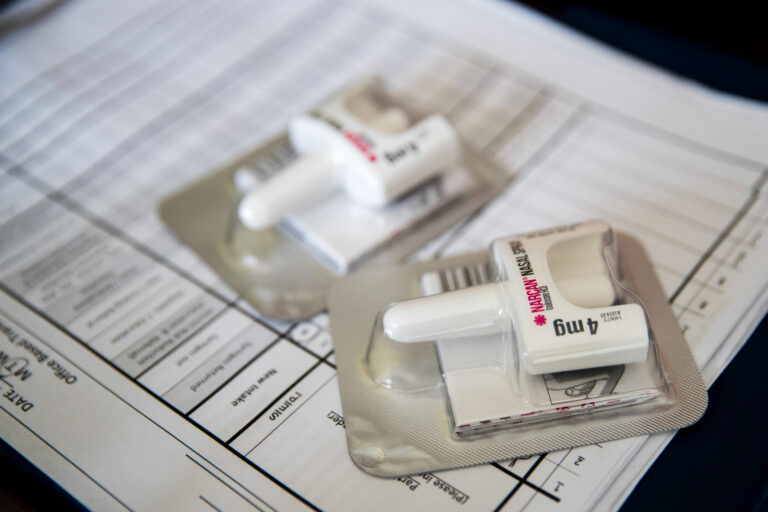 New arrest data shows that Black D.C. residents are arrested almost seven times as often as white residents for opioid-related offenses, which advocates say bolsters their case for decriminalization and the need to move funds away from policing and into safe-use resources.

In a recent summit hosted by Live.Long.DC, the city’s strategic planning group to address the opioid crisis, representatives from the city’s Criminal Justice Coordinating Council presented demographic and geographic information on opioid arrest data from 2017 to 2022. While opioid-related arrests have decreased in recent years, Black residents make up an overwhelming majority of those arrests. From January 2017 to April 2022, 480 white people were arrested compared to 3,342 Black people.

Local advocates for decriminalization who spoke with DCist/WAMU say the data isn’t surprising but that it does underline the importance of their campaign to decriminalize possession while also pushing lawmakers to invest in harm-reduction, like safe-use sites and expanded opioid testing to prevent fatal overdoses.

Their push comes after several successful efforts to loosen drug penalties in recent years. The city legalized the possession and use of marijuana in 2014. Then, in 2020, it decriminalized possession of drug paraphernalia and made magic mushrooms and other psychedelic plants among the lowest police priorities. Steps towards harm reduction have also gained traction, including expanding the availability of Naloxone, the opioid-overdose reversal drug, and partnering with local non-profits to establish safe needle exchanges. But many advocates say these efforts fall short: as long as opioids remain criminalized, they say, Black people in D.C. will suffer the most harmful effects of those laws.

Queen Adesuyi, a senior national policy manager with the Drug Policy Alliance wasn’t surprised by this data — policing disproportionately impacts Black Washingtonians across the board — but says it does underscore the scale of the problem.

“It’s really demonstrating the impact of the compounded mistakes of solely focusing on criminalization as the first means of addressing overdose and then it also continues to highlight that we are not doing enough to treat drug use as a public health issue,” she said.

Adeyusi and other advocates from organizations like the Drug Policy Alliance and HIPS are part of a years-long campaign called Decrim Poverty DC.

The group drafted a legislative proposal in 2021, The District of Columbia Drug Policy Reform Act, which calls for decriminalizing the possession of any drug if it’s for personal use and vacating past convictions for such offenses. It would also create a variety of services, like a crisis response system within the department of health designed for drug-related emergencies, and 24/7 harm-reduction centers where individuals could safely use under the supervision of trained providers equipped with overdose medication and sterile syringes.

“[This data] builds a better case that we should consider ending the arrest of people who use drugs, and instead meeting them with the needs that they have, in terms of social support, economic support, healthcare-related support, whether it’s around their drug use, or untreated trauma, or any other health issues that a person may be dealing with,” Adesuyi says.

The data comes as fatal opioid overdoses continue to rise in the city, largely driven by the now omnipresent fentanyl, a powerful synthetic opioid. From January to March of this year, the city recorded 92 fatal overdoses. That’s lower than the 100 recorded during the same period last year — a record-breaking one for the city with a total of 427 fatal overdoses (nearly double the death toll recorded in 2017).

The data also shows that the most arrests are occurring in areas already recording high overdose rates. Advocates say this is a sign that police intervention is not helping to solve the problem.

Research shows that criminalizing drug use leads to cultural stigma and decreases public support for policies aimed at solving the opioid crisis, by placing blame for drug use on the individual rather than the social factors like poverty, structural racism, and poor public health infrastructure.

Beyond the trauma of an arrest, involvement with the criminal justice system impacts an individual’s ability to find stable housing and employment. Unstable housing makes people more likely to continue using and puts them at a higher risk of an overdose. Studies also show that incarcerated residents, if not treated adequately for substance-use while incarcerated, often return to similar levels of use after release.

The most arrests in the five-year period occurred in the Trinidad neighborhood in Ward 5, with 211 arrests, and downtown and Columbia Heights with 166 and 164 respectively. Meanwhile, most neighborhoods in Ward 3, a wealthy and predominantly white ward, reported less than 10 arrests. According to D.C.’s data, from 2017 to March 2022, the most opioid-related overdoses occurred in Wards 5, 7, and 8.

James Sullivan, an overdose prevention specialist with HIPS, a D.C. organization that serves sex workers, drug users, and residents experiencing homelessness, says that opioid use occurs across the city, but may not be as visible in wealthier areas, where police surveillance is not as prevalent. While there’s no available data comparing opioid use across racial groups in D.C., national statistics suggest that white and Black Americans use drugs at similar rates despite the fact that Black Americans are arrested for drug-related offenses at significantly higher rates – a longstanding effect of America’s war on drugs.

“It’s a whiter, more affluent area, where people are more likely to turn a blind eye to things like that, or people have the ability to keep their drug use kind of hidden and the cops are less likely to bother them,” says Sullivan.

Sullivan himself has witnessed the difference in policing of white and Black drug users in the city, he says. Having had many interactions with police as a past drug user, he says he saw how police treated him compared to the non-white people he was arrested with.

“I was only ever just given a slap on the wrist. The [police] would come at it like, ‘oh you’re too smart for this, you shouldn’t be caught up in this, we don’t want to ruin your life by arresting you,’” Sullivan recalls. “Whereas all of the Black and brown people who I was ever arrested with ended up thrown in jail or charged with something ridiculous, and of course, as soon as you get one charge, then it just keeps making it harder and harder in the future.”

While the D.C. police department tells DCist/WAMU that they do not “typically” conduct arrests when responding to an overdose call, outreach advocates say that after reported overdoses, policing typically increases in the surrounding areas. When two or more overdoses occur within a two-block radius, the city’s Department of Behavioral Health deems these areas “hot spots.” (This occurred earlier this year, when the city reported 29 overdoses in a 48-hour period.) Advocates say this increased police presence contributes to fear and intimidation that can make it difficult for workers like Sullivan to get resources to those who need them.

“Just because somebody is not convicted doesn’t mean they’re not experiencing trauma – either of arrest or the threat of arrest,” says Shane Sullivan, also an outreach worker with HIPS and advocate who has been pushing for decriminalization and safe consumption sites for years.

Advocates say the success of these kinds of policies have been proven in other cities.

To mitigate COVID spread in 2020, Baltimore stopped prosecuting drug possession, prostitution, and other low-level charges. The number of people incarcerated dropped by 20% after State Attorney Marilyn Mosby’s office dismissed thousands of pending cases and more than 1,400 warrants for nonviolent crimes. In 2021, Mosby made the policy permanent. A study from Johns Hopkins University found that from April 2020 to May 2021, 443 drug and paraphernalia possession charges were avoided as a result of the policy (78% of which were in the Black community), and less than one percent of people who had drug or prostitution charges dropped were arrested again on a more serious charge.

Safe-use sites, or safe-consumption sites, are clinical settings where people can use street drugs under medical supervision with access to clean supplies and wrap-around services. These centers currently exist in Canada, Australia, and a number of European countries, and have been proven to reduce fatal overdose rates. New York City became the first city in the U.S. to officially operate safe consumption sites in 2021. (Just this week, California Gov. Gavin Newsom vetoed a bill for safe injection sites.)

Live.Long.DC.’s 2019 report included a budget item of $100,000 to “consider” safe injection sites but the city has not yet laid any firm infrastructure – and the D.C. Council has not yet set up a legislative framework.

Despite the fact that Sullivan and many advocates say these kinds of resources are a “no-brainer” they still face significant political and social opposition for policies that some residents believe go too far.

“A lot of people feel like that’s enabling drug use, which is ridiculous because people are gonna do drugs no matter what,” Sullivan says.

Still, a survey of D.C. voters conducted by the Drug Policy Alliance in 2021 found that 83% supported removing criminal penalties for possession of small amounts of drug possession and 93% supported the creation of a 24/7 harm reduction center.

DCist/WAMU reached out to all councilmembers about these issues but none responded with concrete plans. A spokesperson for Ward 8 Councilmember Trayon White said he was “meeting with decriminalization advocates and weighing the options,” while Ward 6’s Charles Allen, who chairs the Judiciary Committee, said he supports exploring the idea of safe use sites.

“My own background is in public health, which has helped me see the District’s opioid crisis through that lens, rather than with the sole goal of stigmatizing or cracking down on individual users with substance use disorders. That enforcement-only approach simply doesn’t work and isn’t based in evidence,” wrote Allen in an email to DCist/WAMU.

Even if D.C. did introduce legislation to create safe-use sites, the effort could be stymied by national lawmakers. Due to D.C.’s non-statehood status, city budget needs to be approved by Congress.

Meanwhile, other groups like the Health Alliance Network, a D.C.-based health equity group, have been pushing the city to build sobering centers, or places where intoxicated individuals can seek short-term care. They’re also pushing for a 24-hour intake and treatment center with wraparound and youth services in Ward 7. Ambrose Lane Jr., the group’s founder, says that decriminalizing the possession or use of drugs will only be successful if the city adequately funds the infrastructure to support all aspects of health, like housing, income disparities, and healing from trauma.

“Unless you are mitigating for these other factors, all that criminalization will end up doing is proliferating the use, and in the absence of the treatment options that are really not as available as they need to be in Ward 7, in Ward 8, and Ward 5 it will just exacerbate the situation,” Lane says. “So yes, decriminalization, in conjunction with dealing with these other issues.”